They cut down half the tree at the first turn on the trail up to Red Mountain. It was an aspen or poplar of some sort, and I had had many a thought whilst gazing upon it. Half of the tree is clothed in green leaves, but the other half was mostly dead and bare.

The juxtaposition of life and death had snatched my attention several times on that hike. Sometimes reminding me to be thankful for the beauty of life when seen in the shadowy presence of death. Sometimes it reminded me that I am like that tree - full of life where God has come in, yet plenty of dead branches of sin still needing to be removed.

When I saw that the dead half of the tree had been chopped down, my first response was to check the tears rising in my eyes. Why should I be sad that someone removed a tree that was sapping life from the living half? Would I be sad if God just cut out all of my sinful deadness and removed it? No, that is ridiculous. I rejoice when He clears out the deadness inside. But sometimes -- always, I think -- it hurts when He prunes away my sin.

Sometimes we must endure unbearable hurt. We must recall that pain is not always a result of our own sin. All sorrows and hurts can be used for our good, though I cannot always remember that when I am walking through the depths of the valleys.

Today has been one of those days where I want to bear someone else's pain, but I cannot -- it is too much for me, and it does not alleviate them. When I looked out over the city from the foothills tonight, I realised that the hurt I feel for my friend, though it seems crushing to me, is only the hurt of one person amongst those thousands. One hurt among the billions across the globe. I cried out to God, asking how He could possibly bear the brokenness that fills His world. Then I walked home past that brokenness. And it revolted me, rather than melting me, which I think sin ought to do. Yet I want to move beyond the repulsion to the point where I can lift broken things up to God, the only Redeemer and Re-creator.

The Lord reminded me several times tonight that He is making things not like they were, but better than they were. He is not only restoring us and the whole world, He is re-creating us. There is hope, beyond those darkest moments, most vile atrocities, and heart-shattering pains. How do I know? Because one day it was true to say that God was dead, and we killed Him. Because He became our sin, and His own Father turned His face away from Him. Then He turned death upside down. And one day, He will do that for us, too.

When hope is more than you can bear
And it’s too hard to believe it could be true
And your strength fails you half way there
You can lean on me and I’ll believe for you
Give it time, you will believe it too


No one should have ever taught me how to make scones. 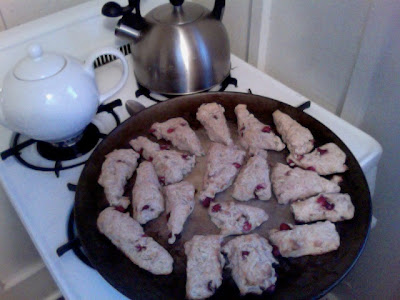 Cranberry orange scones, with a hint of ginger, made this afternoon. Note the tea kettle and teapot ready for use alongside those scones...

Baking isn't my area of expertise, or passion, however. I much prefer cooking. Last night I made roasted red pepper and garlic hummus (note my re-use of a hummus container for this project). God made the fruit in the background. 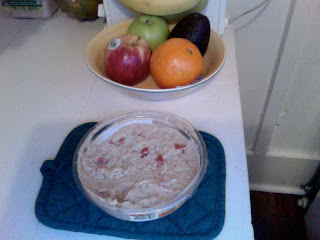 I also got a haircut and slightly different style yesterday, thanks to my dear friend Rebekah. 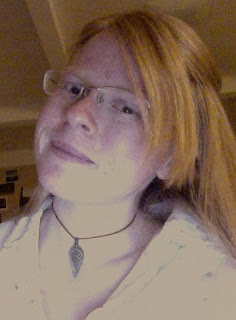 And just now three sweet friends (Colleen, Asha, and Caitlin) dropped in to sample my cooking - fun! I must be off to the airport to pick up my Lyndi-friend.

Until next time, I remain ever under the Mercy.

Last Friday I ordered a sushi mat and wooden spoon. In preparation for its arrival, I picked up some Nori (seaweed sheets), wasabi, cream cheese, cucumbers, and avocados at the grocery. All together (including the sushi mat), I spent about $12 for supplies to make ten rolls of sushi.

I made sushi rice. I sliced the veg. I hunted up my nice pair of chopsticks. I pulled out the wasabi and soy sauce. I rolled it on the sushi mat... And presto! 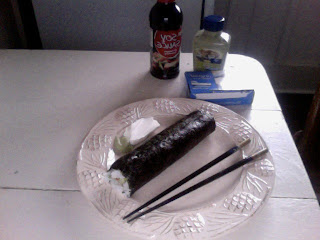 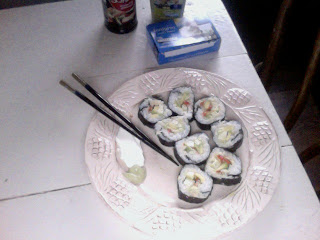 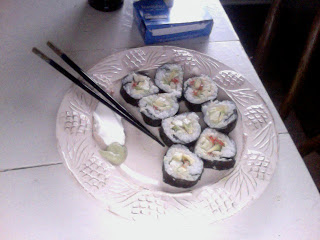 Oh the places one can go in the culinary world with combinations for sushi! Any suggestions for my next venture?