Being Italian for a Day

Today I stepped back in time and took life at a slower pace. For nearly seven hours I was given the gift of being Italian.

It all began about a year ago when our (then) new accountant kept telling those of us in the office about "tomato day". She and her husband would go to the fields and pick bushels of tomatoes. They would save them for a week to make sure they were really ripe. Then began the process of turning those tomatoes into a year's worth of pasta sauce. Many a time I have sampled minestrone, Italian vegetable soup, and so forth imbued in the goodness of this homemade sauce. Today I was given the opportunity to join in the labour of the fruits.

Three of us from the village arrived at Sue and Blake's house around nine in the morning. We petted the dog, washed our hands, met some family, and jumped in to the fray. Soon we were slicing onions in great big quarter chunks and learning how to peel garlic by shaking it inside two metal bowls (this actually works, you should try it). I also encountered a wooden spoon longer than my leg, which is impressive, because my legs are the longest part of me. When all was said, sliced, and done, we had four bushels of tomatoes, six onions, two bulbs of garlic, and two large containers of basil simmering over the camp stove in a collective eighty quarts. If you have never seen a twenty quart pot, you may not realise how massive it is compared to whatever normal persons use for cooking. However, the twenty quart pot was significantly dwarfed by the sixty quart pot and the spoon the size of Reepicheep's coracle paddle. Perhaps a photo will help illustrate my point: 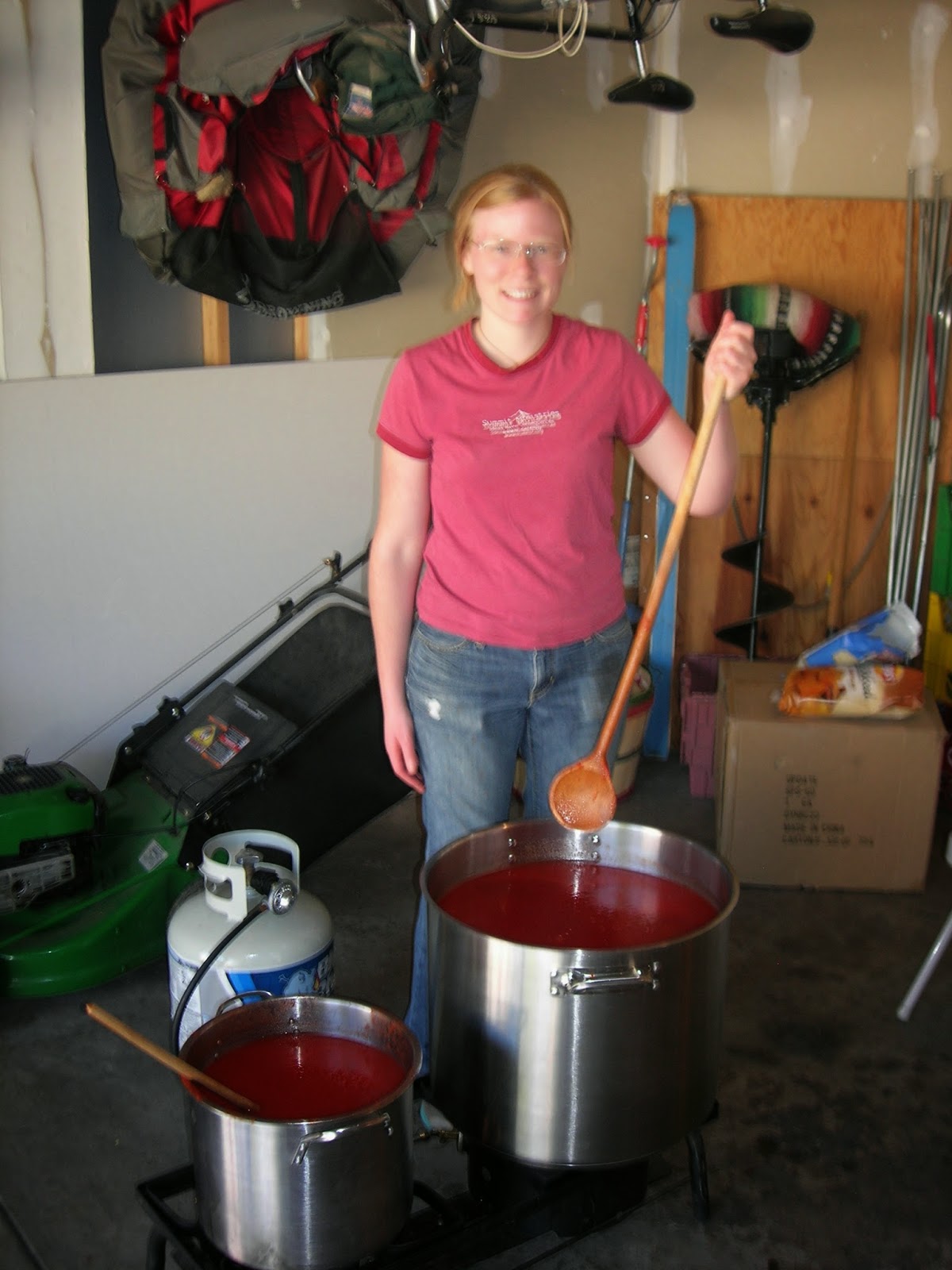 See, doesn't the twenty quart pot look like your everyday sort of soup pot? Unless you normally feed an army, however, that pot was by no means everyday-ish.

We stirred and squashed tomatoes for a few hours. We ate lunch. We petted Verona some more. Finally, the tomatoes began to boil into a rich red, aromatic fervour. We washed our hands, set up the press, gathered pots and buckets, and formed an assembly-line. Blake said "go!" and we began. Amanda poured the boiling hot tomato mixture into the wide funnel, I pressed it down with the plunger, and Sue cleared the skins and debris as they filled the flat "catcher". Those skins and onions and basil leaves went back into the press's funnel—we wanted all that flavour! Then they were removed to the rubbish. Various splatterings and eruptions left us with orangey splotches on our arms, feet, jeans, and shirts. Blake kept bringing pots and pans to catch the juices and thick sauce. We filled four different containers with that crimson, delicious-smelling sauce. Then back into those huge pots it went for an hour to boil out any bacteria. 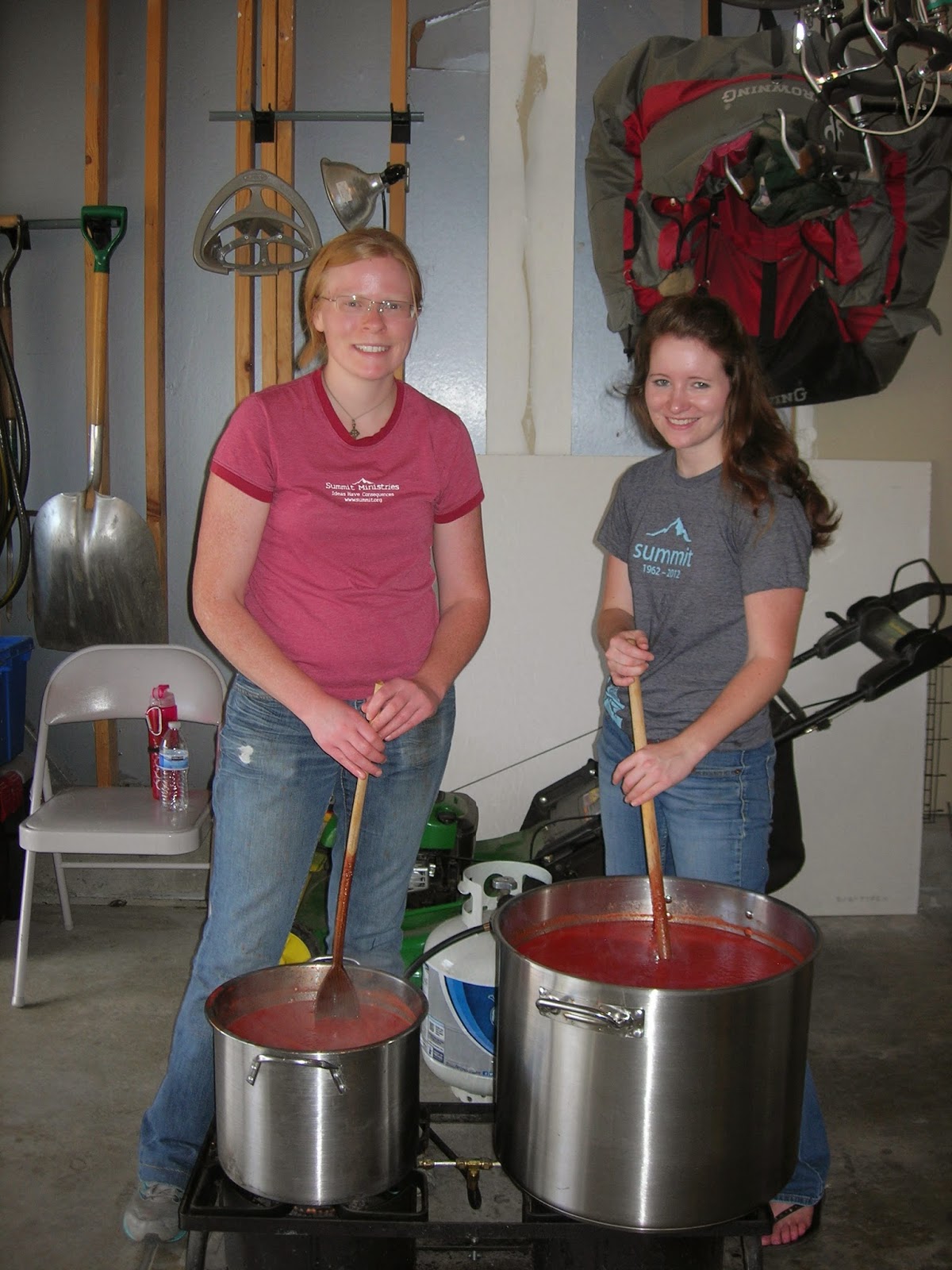 We stirred continuously to prevent burning the sauce. We set up the table with jar after jar—over sixty of them. Blake boiled the lids to ensure a good seal. Sue took soundings with the thermometer—we had to hit 180º. We let the sauce "percolate" there for about half an hour. Out came the silver funnel for filling small mouth jars. Out came ladles and glass measuring cups with pour spouts. Next came the empty boxes to put the finished jars in for safe-keeping. Over came the neighbour girl to help wipe around the jar tops to make sure they sealed well. All was set... Then Blake said, "Go!" and we were in full swing. Clear jar after clear jar was filled with hot, pungent, tomato sauce. Red jar after red jar was passed to me to put in the empty boxes. In a matter of minutes sixty-two empty jars were full and sitting in their cardboard casings on the counter. 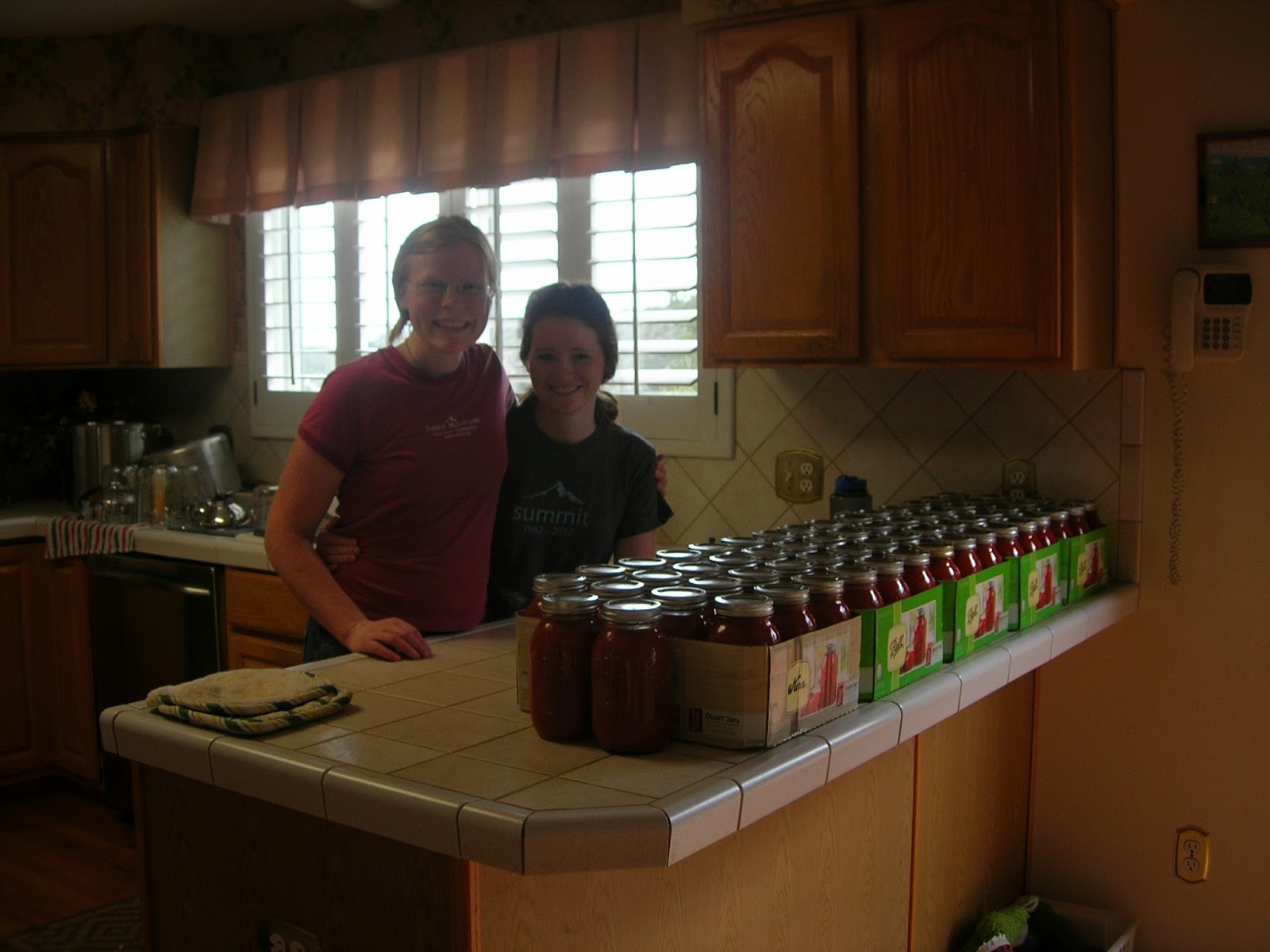 The dishes were washed and drip-drying; the delightful "pop!" of the seals was beginning; and four tired persons were grinning at the success of the day. We had made legitimate Sicilian tomato sauce with a recipe and process passed down from Blake's grandparents. We had been swashed in hot red juices and remained standing. We had picked up nearly all the parts and pieces... And it wasn't even four o'clock yet.

It felt good to stir hot sauce on a cool Autumn day. It was rewarding to slow down and make the year's supply of sauce, rather than buying that processed stuff from the grocery. I was reminded of all those times growing up when my mother, sisters, and I cut, cooked, mashed,  pressed, and strained apples for applesauce. I remember crisp days, sweet smells, and very tired arms from hand cranking that machine. But the satisfaction at the end of the day in making one's own food with one's own produce and labours was just the same. There is something to be said for making things rather than buying them.

There is a sweet satisfaction a a job well-done. There is camaraderie, fellowship, and working together in the process. You get to know stories you might never have heard were you not using an oar to paddle red sauce over open flames. You learn more about your friends and family, your skills and others', by working together. And you have to take life slowly when you're watching a sixty quart pot of tomatoes boiling. I'm glad I was allowed to be Italian for the day.