"...Indeed the only way in which I can make real to myself what theology teaches about the heinousness of sin is to remember that every sin is the distortion of an energy breathed into us - an energy which, if not thus distorted, would have blossomed into one of those holy acts whereof 'God did it' and 'I did it' are both true descriptions.

We poison the wine as He decants it into us; murder a melody He would play with us as the instrument. We caricature the self-portrait He would paint. Hence all sin, whatever else it is, is sacrilege."

Fog renders the foothills out my window nearly invisible this morning. In much the same way, sin renders the good thing from which it derives existence unrecognisable, incomprehensible. There is so much good in the things God made, because He made them, and He is goodness itself. Yet when we take a good thing and turn it on its head, it becomes vile, wretched, utterly broken. Lewis chooses well when he says that sin is sacrilege. Sacrilege is defined as a "crime of stealing what is consecrated to God." Indeed, that is what every sin is; stealing God's glory, or God's good thing and using it to satisfy our cravings, to harm others, or turning it into an idol.

God is greater than our sin, more imaginative and redemptive than our corruption of His good things. All we can think to do is twist something good into cruel, sick, selfish means to our own ends. God, however, creatively, completely, redeems brokenness. He turns the Fall upside down in the most ludicrous and paradoxical ways.  The God of the universe, Creator of all things, becomes part of the creation,  dwells inside the universe. He Who could not sin, became sin itself in order to make us the very righteousness of God. When the first Adam failed to obey, the Second Adam fulfilled the Law in spirit and in truth. When we could not atone for our sin, the blood of the perfect Lamb was shed in our stead. Who is this King of glory?

This King of glory rode into Jerusalem one day to the shouts and praises of His people. They shouted words to the effect of, 'Save us, O King!' that day. Less than a week later they screamed, 'Crucify Him, crucify Him! His blood be on us and our children!' And what was condemnation for this demand, was turned right side up. Rather than guilt and culpability remaining on those who appealed for Jesus' blood, that same blood was upon them, to cover all their sin. Rather than covering their hands in blood, Jesus offered to sprinkle them entirely to remove their condemnation.

Often Christians will say this all took place on the cross. After all, that is where the blood was shed. But many innocent men have been killed (though no other sinless men have been executed), how does the bloodshed of an innocent man save anyone? Partly it is because Jesus was sinless and took the penalty we all deserve and He did not. The wages of sin, the payment for sin, is death. So Jesus died on the cross, that image we see throughout the ages in churches, on necklaces, on wall art, and more. So He paid a debt that we owed and could not pay. So what?

This is where many Christians miss the mark. Too often we stop at the cross, we end the story on Good Friday, and Jesus is still in the tomb. What I love about Eastertide is that it is the co-mingling of Good Friday, Holy Saturday, and Easter Day. The fact is that the tomb is empty, and the One Who formerly occupied it had the authority to defeat death.  In fact, He had the authority to declare to those chained in darkness that He had won.

The cross is no icon of hope at all if the empty tomb is not set beside it. The cross does not tell the whole story -- not without remembering that the cross is empty and the tomb is empty because Jesus is alive.

Let me encourage you not to turn the very cross of Christ into an idol. We do this when we do not tell the whole story, when we forget the risen Christ. 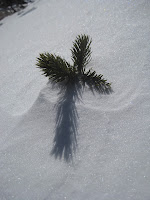 Let the cross instead be an icon to us. An icon is a real object that reminds us of a historical or spiritual truth. Let the wine be drunk physically to remind us of the blood shed to save our bodies and souls. Let us bow to the cross because it reminds us that Jesus is our King, and we must revere and honour Him. Let us delight to be where the Composer has placed us in the melody of His symphony. Let us look at the scarred tree, the paintings of the scarred hands and feet, and be reminded that He was pierced  and wounded for our lust, anger, pride, and over desire. Let that empty icon tree remind us to seek the living Jesus.